Yesterday sucked.  It felt like one of those days where you are crushed under the weight of the world.  A friend asked me if I was focusing on my blessings.  NO.  Otherwise I wouldn’t be so crushed.

This morning I decided I would write 200 things that I am thankful for, broken down by People, Experiences and Things, in that order.  I wanted things to be last since they hold the least importance.  I wanted 200 entries, but forced myself to think of 200 experiences throughout my life.  I realized I have done some pretty cool things in my life, like touring the USS Enterprise and USS Kitty Hawk aircraft carriers, cliff jumping, skating behind a truck, river boarding, doing a set of 250 push up (which I can’t do right now), three century bike rides, hiking 50 miles in under 20 hours, earning my black belt in Bushi Ban Karate, and other things.  I’ve done a lot of things most people haven’t.  I have cool people around me, and I own some cool knives and gear.  I spent over five hours working on that entry, because I wanted to use it the next time I start to feel like I did yesterday.

It was a good exercise to see what I have accomplished and what is around me.

I took my dog on an early morning winter hike today. I think it was about 9* F, so I wore a lot of layers. Too many layers. I hiked up the Flintstone bike trail, then south along the ridge.  I took these pictures from just below the ridge.  Then I ran down the hill and home on the trail to the explosives plant, running about two miles.  I haven’t been running for a long time, because biking is better, but I did it in hiking boots and my Camelbak Transalp.  It was a nice to be outside, even in the cold. 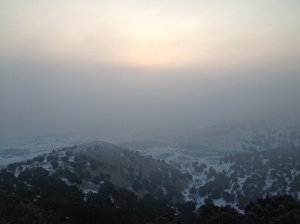 States I only have one reason to ever visit

States I don’t ever want to visit

Been there, but don’t want to return:
North Dakota
Nebraska
Missouri