Theron died a year ago today. I can’t believe it was that long ago. He is a great person, and I really miss him. After family, I look forward to finding him after I die.

I bought an iPad a few months ago, and started my experience with Apple products. We found out today that we could upgrade our phones with Verizon, and anyone who doesn’t upgrade in the next two days will lose unlimited data. We had been grandfathered in on the unlimited data plan, so we had a short window to make it all happen. In considering which phone to buy, the ability to sync with my iPad was a major factor for me. I couldn’t think of a compelling reason to choose Android over the ability to sync, so I went with the iPhone 4S. Ideally I would have waited for the new iPhone, but that window was closing quickly and I didn’t want to mess with changing cell providers. I think I am going to love this phone.

I got a quick mountain bike ride in after Family Home Evening tonight. I took my dog to investigate the burn area.

This is on a small hill looking east over Saratoga Springs.

Another person made a comment that discharging firearms should be illegal when there is a fire. Brilliant. There is a fire or other disaster and we can’t use firearms to defend ourselves. That worked out so well during Katrina. I can see not target shooting outside when there are fires burning in shooting areas, but stopping the use of all firearms in all situations is ridiculous.

We returned to our house after a mandatory evacuation two days ago. The fire on Lake Mountain, dubbed the Dump Fire, started to move north on Friday after the wind changed direction. I raced home to help DeLana pack the car, then we headed to Orem to work at Liquidation Team and help prepare for the opening on Saturday. Mike took Max and some of our stuff to his house, so we didn’t have to worry about that. We stayed at my brother’s house for two days, and it was weird to come home and see what had been burned. Thankfully no houses or lives have been lost at this point. I can’t wait to hike or ride up there and see how extensive the damage is. It’s interesting to see what you take when you think you may lose anything you leave behind.

My Dad is one of the greatest people I know. A lot of people say that, but in my case it is true. He would take us on Fathers and Sons outings when we were younger. He went to most of my sporting events. He pushed me to get my Eagle Scout award. He made me to go Seminary and firesides. He wrote me every week on my mission. He held scripture study and family prayer every day. We had Family Home Evening every Sunday and Monday. He took us to Yosemite every year for our family vacation. He taught me how to fish and enjoy it when we didn’t catch anything. He taught me to work hard. He is always helping to put away chairs after Priesthood session of General Conference after others have left. He worked very hard to give us the things he did not have growing up. He broke what could have easily been a cycle of divorce and neglect by constantly putting us first. He does what has to be done even though he is in pain. He is the greatest example to me of service and I love him.

This week I helped my dad start the move from their existing warehouse to the new site in the former Robert’s building on Center Street and Orem Blvd. We took down several rows of shelving and put up several rows of shelving. We had to move move everything off the warehouse floor so it could be treated, then move everything off the showroom floor so that could be treated. We had to move a lot of pallets, so we saved time by riding the pallet jacks in between runs.

I also got to ride a scissors lift for the first time. The controls are touchy because the joystick only moves forward and backward, and the joystick buttons make it move left and right.  I need a little more time to get precise with driving it, but I can add it to the list of things I’ve driven. 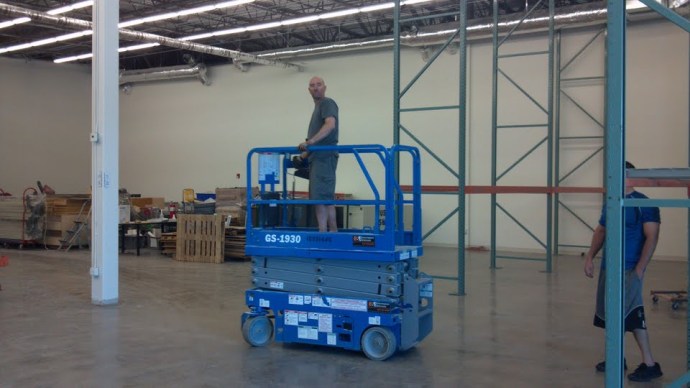 I rode the Pony Express Days century ride for the third year. Dan from Epic Biking started the ride three years ago on the 150th anniversary of the Pony Express Trail. I wasn’t going to do it then until I realized it was an historic year. My goal is to ride it every year that I live in Utah.

We started at my Stake Center on Pony Express Parkway and rode to Redwood Road. The first part of Redwood Road was easy, and two groups broke away. I had no hope of hanging with them. The rolling hills at Pelican Point started to drain me. I was breathing heavy and questioning my ability to pull it off this year. Another group passed me, but they were going too fast to join. Several riders with Adobe jerseys passed me and I jumped in with them. It wasn’t quite the pace I was hoping for, but it gave me time to rest my heart and legs and reset my failing mental state. We bypassed the first rest stop and rode in to Elberta at 1:38:52 and 32.73 miles. Average cadence was 88, with my maximum at 115. Average speed was 19.8 MPH, with a maximum of 36.5 MPH.

Now comes the part I was concerned about. I broke my shifter a few weeks ago, so I couldn’t use my small front sprocket. Mike Both bought me an 11-28 rear cassette, which was like adding another gear. That helped, and I zig zagged my way up the steep parts of the nine mile climb to Eureka. Last year I made the climb in 54 minutes. Today I did it in 52 minutes. I made it to Eureka at 10:42 am. I’ve never made it there before 11 am, so that felt great. So did passing so many people and not being passed. I pulled in to Eureka with a ride time of 2:31:35 and 41.82 miles. Average cadence was 86, and max was still 115. My average speed dropped to 16.5 MPH. After a ham and Swiss sandwich, Cheetos and more chamois butter, I left alone.

The downhill out of Eureka was a nice break, but the rolling hills section was tough. I couldn’t keep an acceptable speed until the road flattened out. I think I caught a tail wind for a while because I hit 37.6 MPH, which was my high speed for the ride. I pulled in to my third stop at 12:07 pm, and I forgot to record my ride time. This was 61.65 miles, with an average speed of 17.4 MPH. Average cadence was 88, max was still 115.

Leaving this stop meant tackling a steep hill. At this point I was just looking to get over it, not break a speed record. I did well on this section, raising my average speed to 18 MPH. Most of it was flat so i just had to maintain my speed. I pulled in to the last rest station at 1:17 pm, at 79.37 miles. My cadence did not change on this section.  This is a picture of the Pony Express monument.  I love having this for a rest station.

This is me resting in the shade at the Vivint truck.  Vivint rocks.  I ate a lot of strawberries and blueberries, so this was a great rest station.  I took my time at this station because I knew it was 25 miles to the finish line, and the wind looked ominous.

I think the last leg was the most difficult.  We had a head wind or cross wind the whole way home.  Two years ago it was a head wind from Eureka to home, so I’m not complaining, but it wore me out today.  Last year my ride time was 6:24:03, and I really wanted to finish with a ride time under six hours.  The wind was bad at Five Mile Pass and I didn’t know if I could do it.  It started to rain about two minutes before I hit the gas station in Cedar Fort.  I thought about pulling over, but decided to try and beat the rain.  I prayed that I would not have rain and wind and the wind died down.  When I could see the entrance to Eagle Mountain I knew we weren’t that far from the Maverick, but I also realized I had to push harder against the wind to reach my goal.  I was able to bump my speed up a few miles per hour, and hold it passed the entrance.  I knew it was going to be close, and I kept pushing.  I caught up to another ride and we finished together.  It was nice to have someone to talk to for a few minutes.  It started to rain again at Maverick, but not as bad as Cedar Fort.  I pulled in to the Stake Center at 3:17 pm.  My ride time was 5:54:07, with an elapsed time of 7:15:54.  I rode 105.28 miles, with an average speed of 17.7 MPH and a max speed of 37.6 MPH.  My average cadence was 88, with a max cadence of 115.

I feel great about today’s ride, and I think I was in better shape.  I’ve lost 15 pounds since December, and I rode 344 miles in May.  Eleven rides were on my mountain bike, and 13 were on my road bike, so it was a good mix.  Even though I was in better shape than last year, I felt the hand of God intervening on my behalf.  I was struggling to ride alone on Redwood Road, and I couldn’t hang with any groups until the Adobe riders came by.  That allowed me to rest my legs and reset my mental capacity.  I was able to zig zap up the hill to Eureka and pass lots of riders in my middle chainring.  Once the canyon opens up you still have a few miles to go to the Eureka stop, and it’s still a grinder climb, but I reached that point sooner than I expected last year and today.  I was able to have a tail wind that helped me make up some time.  I was able to push through the head wind and cross wind on the last 25 miles.  I was protected in the rain.  I was able to push hard as I approached the Eagle Mountain entrance, even though I was tired.  I spoke to God a lot on this ride, like I did on the last two rides, but I think He intervened more for me today.  I prepared myself, but what I didn’t today was beyond my preparation.  It’s a trivial thing for Him, but it means a lot to me.

You can click this link to go to Strava and see what I did today: http://app.strava.com/activities/9951305